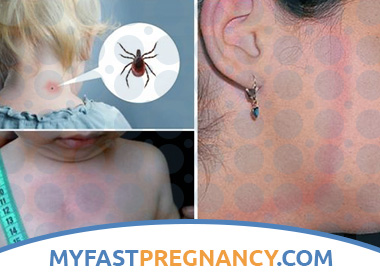 What is Lyme Disease (tick-borne borreliosis) in Children?

Systemic tick-borne borreliosis is better known as Lyme disease. It also bears the following names: tick-borne meningole-neuritis, chronic migrating erythema, erythemal retroshetosis, Bannovart syndrome. This is an infectious disease, the foci of which are observed in the wild, and which is initially manifested by skin lesions such as annular migrating erythema, and then multi-system neurological (sometimes cardiac) disorders, intermittent mono-and polyarthritis with a benign course.

Lyme disease epidemics occur in the spring and summer, sporadic cases occur, the areas of the onset of the disease coincide with the places of residence of the carriers of infection. These features are typical of natural focal diseases with a transmissible route of transmission. Transmissible diseases are those that are transmitted through insects and ticks. Tick-borne borreliosis affects adults and children of school age. In more rare cases, children of the first years of life (kindergarten age) become ill.

The independent species name of Borrelia burgdorferi was given to the causative agent of the disease in 1984, in honor of the name of the author-discoverer.

At the site of the tick bite after incubation, the spirochete migrates to the periphery of the skin with the formation of erythema migrans, skin infiltration and lymphadenitis. On the bloodstream and lymphatic ducts pathogens enter the organs, causing damage to the nervous system. Then they spread rostrally.

From infection to the manifestation of the disease takes an average of 8-12 days. Then in 50% of cases there are signs of obesity syndrome, such as anorexia, asthenia, low-grade fever, in some cases nausea and abdominal pain.

In the place where the child was bitten by a tick, a ring-shaped migrating erythema appears in the form of rings of different diameters with intense hyperemia (reddening). The center of the erythema has a paler shade, enlightenment. Along with erythema, regional lymphadenopathy and myalgia develop.

At the beginning of the disease, herpes sores, migratory arthralgia, meningism can occur. There is a possibility that the only symptom of the onset of tick-borne borreliosis in children will be erimetta.

First, the general infectious stage of the disease is called, during which erythematous rashes appear, then the period of neurological lesions begins, less often cardiac lesions occur. At first, manifestations of lesions of different parts of the peripheral nervous system, which manifest themselves as pain syndrome and radicular mono- and polyneuritic disorders, appear. Asymmetrical moderate or mild paresis appears. Under paresis understand neurological syndrome, which manifests itself as a weakening of voluntary movements. Movement disorders correspond to the zone of sensitive disorders, but are less common. In rare cases, children develop focal lesions of the peripheral nervous system – common polyradiculoneuritis, radiculoneuritis, plexitis. They can be combined with cardiopathies, but more often with arthralgia and arthritis. Systemic tick-borne borreliosis is not manifested by encephalitic symptoms.

This disease is characterized by serous meningitis – affection of the pia mater. When the peripheral nervous system is involved in the pathological process, plus serous meningitis is present, a “clinic” of meningopolyneuritis and meningoradiculoneuritis appears.

A distinctive feature of systemic tick-borne borreliosis in children is a combined damage to the nervous system. Meningeal symptom complex may be more pronounced than other types of neurological disorders.

In children, Bannovart syndrome is rarely (more often in adults) with tick-borne borreliosis. Infection has a negative effect on the motor and sensitive roots of the cranial and spinal nerves at any level, but mainly in the cervicothoracic region.

In a child with tick-borne borreliosis, the facial and trigeminal nerves are often affected. Before paresis of the facial muscles, pain occurs in the trigger zones or orbit, pain in the ear region, paresthesia, etc. There may be catarrhal inflammation of the conjunctiva.

The facial and trigeminal nerves are restored from 2 to 4 weeks. At the end of the recovery period, there may be muscle weakness or slight facial asymmetry, probably damage to the oculomotor nerves.

Tick-borne borreliosis in children is of the following forms:

The last two named forms are simpler from the point of view of the manifested symptoms. Cardiopathy manifests itself as an expansion of the borders of the heart, systolic murmur, muffled heart tones, ECG changes, lowering blood pressure, which immediately affects the general well-being of the patient. Cardiopathic phenomena can occur from 1 to 2 months.

The degree of locomotor muscular disorders and the level of motor neuron damage is determined by neurophysiological studies, resorting to myography, which is also known as electromyography. This study, which is carried out using a special device that allows to identify the exact site of nerve damage, which makes it possible to find out the causes of muscle atrophy, paralysis and increased nervous sensitivity. This makes it possible to identify neuromuscular disorders in patients with systemic barreliosis.

When a child recovers from tick-borne borreliosis, he may have asthenovegetative reactions, which manifest as emotional lability, hyperexcitability, and sleep disorders. By emotional lability understand the unstable mood, its unreasonable changes. Hyper-irritability occurs in both infants and children of school age, and in adolescents. It manifests itself primarily as a motive concern.

To determine the titers of specific antibodies to the causative agent, an indirect immunofluorescence (H-REEF), ELISA (Elisa) reaction is used.

Treatment of the disease during the acute period requires the prescription of broad-spectrum antibiotics. They are taken orally or parenterally, depending on the severity of the symptoms.

Doctors prescribe penicillin and cephalosporins, macrolides to sick children. Doses are calculated based on the child’s age. The course of treatment lasts from 10 to 14 days, as prescribed by the attending physician, depending on each individual situation. To eliminate neuromuscular disorders, agents are prescribed that promote blood supply to skeletal muscles (including halidor, no-silo, complamine, nigexin, etc.), as well as means for restoring nerve conduction (among them: oxazyl, cerebrolysin, prozerin, galantamine and vitamins of group B). Means are also used to reduce the breakdown of muscle proteins, for example, lidazol, nerobol, retabolil, etc.

In the early period of recovery (convalescence), multivitamins, nerobol, methionine, cocarboxylase are used.

Prevention measures begin with tick control, which includes direct extermination of them in natural habitats and protective measures for people, for which special anti-tick suits are used when necessary. If a person is in the habitats of ticks in ordinary clothing, he should tuck in his trousers and shirt so that ticks cannot penetrate to the body. To protect against ticks, special means are used – repellents. They can be purchased at pharmacies and large cosmetics stores, as well as in the markets.

The leading entomologists from Russia have developed the “Anti-encephalitic suit BioStop®”. It combines mechanical and chemical protection principles. It has traps for crawling up ticks that look like shuttlecocks. Inside this flounce is an insert with a substance that is fatal to the tick (the tick dies in 2-3 minutes). When using this suit in endemic foci, repellents are not needed.

If a child has been bitten by a tick, you should soon go to an infectious diseases hospital, where a removed tick is examined for the presence of Borrelia causing tick-borne borreliosis in children and adults. In order to prevent Lyme disease after being bitten by an infected tick, it is recommended to take doxycycline 1 tablet (0.1 g) 2 times a day for 5 days (children under 12 are not prescribed).

Lyme disease affects people of all ages. Although this disease is similar to tick-borne encephalitis, the incidence of Lyme disease is much higher. In addition, tick-borne borreliosis (Lyme disease) often leads to chronic forms of the disease. Lethal cases at the moment are not fixed.