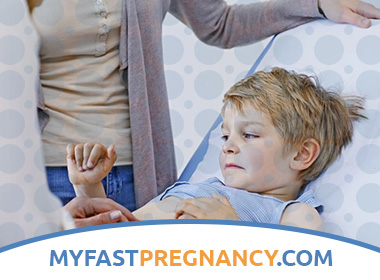 What is Ascariasis in Children?

Ascariasis is an invasion of a roundworm called ascaris, a disease that can first pass as an allergic disease with fever, skin rashes, blood hypereosinophilia, “volatile” eosinophilic infiltrates in the lungs. In the chronic stage, ascariasis in children is usually manifested by moderate abdominal pain, gastrointestinal disorders, and sometimes asthenia.

According to the international classification, there are such types of ascariasis in children:

Ascariasis belongs to the group of geohelminthiasis. With feces eggs of worms fall into the soil, where they ripen for 2 to 3 weeks. A child becomes infected by eating vegetables, fruits, and drinking water that contains parasite eggs. Eggs do not withstand high environmental temperatures and drying. In moist soil they can be stored for up to 6 years.

In countries of the middle zone ascariasis is transmitted, starting in April, ending in October. In areas with a tropical climate can be infected year-round. At risk – children from 5 to 10 years, because they are most active and do not have sufficient hygiene skills and immunity.

Causes of Ascariasis in Children

Roundworms are large worms shaped like a spindle of a pale pink shade. The length of the females is usually from 25 to 40 cm, the rear end of the body is straight, pointed. The length of the male roundworm from 15 to 20 cm, the end of the tail is bent to the ventral side in the form of a hook. The body of the helminth is covered with a thick cuticle. The female in the intestine lays more than 200,000 eggs per day, some of them are fertilized, some do not. Eggs get into the environment with feces. Roundworm live for about 1 year.

Pathogenesis during Ascariasis in Children

The invasive roundworm larva is released from the membranes in the upper GI tract due to the action of enzymes. The larva from the small intestine penetrates into the blood vessels. In the portal vein, Ascaris larvae “pass” through the liver, entering the right side of the heart, and through the small circle of blood circulation they enter the lungs.

From the capillaries, the larvae penetrate into the alveoli, then gradually rise through the bronchial tree to the larynx, enter the pharynx, are swallowed with saliva and re-enter the small intestine. The migration process described above lasts from 2 to 3 weeks.

In ascariasis, indigestion is caused not only by an inflammatory reaction with hypersecretion of intestinal enzymes, but also by impairment of the production and interregulation of peptide hormones.

Symptoms of Ascariasis in Children

When infected with ascariasis, incubation lasts from 2 to 3 weeks. The early stage of the disease can occur in the subclinical form with low-intensity invasion.

In children from 3 to 9 years, the acute form of the disease, as a rule, passes with a high subfebrile condition or fever, skin exudative rashes. The most common pulmonary syndrome in the form of dry or wet cough with the development of “volatile” infiltrates, less often – pneumonic foci, blood eosinophilia up to 20-40% against the background of leukocytosis. Sometimes symptoms such as nausea, pain throughout the abdomen, and stool disorders are recorded.

If a large amount of the pathogen has entered the child’s body, not only pneumonia and pleuropneumonia can develop, but also granulomatous hepatitis with moderate jaundice, hepatosplenomegaly, an increase in serum alkaline phosphatase, transaminase activity, all globulin fractions, bilirubin level, changes in sedimentary samples.

When ascariasis in children can be heart damage with deafness of heart tones, tachycardia. Without early treatment in young children, massive invasion can lead to death.

Ascariasis in children in the chronic stage is manifested by intermittent epigastric pain, as well as around the navel, in some cases in the right iliac region. Less common are symptoms such as increased hunger, constipation, and unstable stool.

In weakened children and infants diarrhea occurs, and defecation occurs only 2-3 times a day. In the stool impurities of mucus are found.

Stages of ascariasis in children:

In the acute stage of a child, common allergic phenomena or pulmonary syndrome may occur, or severe multiorgan lesions, such as myocardial dystrophy, hepatitis, pleurisy, pneumonia, are also possible.

Complications. With high fever, vomiting, irrational chemotherapy, the parasite can get into the respiratory tract from the pharynx, leading to suffocation.

Helminths can crawl into the auditory tube. Also, the parasite eggs accumulate in the appendix, which leads to the development of appendicitis. If a large amount of the pathogen has entered the body, and if there is a tendency to spasms in the intestine, dynamic obstruction is likely. In rare cases, the cause of obstruction are tangle of ascaris.

If ascariasis is uneventful, the prognosis is favorable. But invasion can complicate the course of acute bacterial infections, which leads to asthenia, anemia, and delayed development of the child.

Diagnosis of Ascariasis in Children

For the diagnosis of ascariasis in the acute stage in children, an epidemiological history is needed, the definition of the clinical picture (symptoms and their development), which includes febrile illness with skin, pulmonary syndromes, transient dyspeptic symptoms and hyperesis.

Confirm the diagnosis of ascariasis using serological methods RIGA, ELISA. In the second or third week after infection, positive results can already be obtained. In the sputum, the larvae are rarely found, but a large number of eosinophils are recorded, sometimes Charcot-Leiden crystals are found.

If 2-2.5 months have passed since the infection, the diagnosis is confirmed by detecting the eggs of the parasite in the child’s feces. Ascaris eggs have a size of 0.05–0.1×0.1 —0.04–0.06 mm, oval-shaped. Unfertilized eggs are irregular, spherical or triangular in shape, filled with large, irregularly shaped yellow bodies, rarely surrounded by a protein shell.

Treatment of Ascariasis in Children

Ascariasis in children in the acute stage is treated with antihistamines. They should be taken orally. Severe forms of the disease are treated by parenteral administration of calcium gluconate, calcium chloride, ascorbic acid solutions. Ascaris larvae can be killed with a thiazolyl benzimidaeol derivative — mintezol at a dose of 25 mg per 1 kg of a child’s body per day, the dose is divided into 3 doses. The drug is taken after a meal course of 5 days. Treatment can increase the allergic reaction, because it is usually carried out in a hospital setting against the background of desensitization therapy. Doctors may even appoint glucocorticoids as a 5-7 day course as desensitizing therapy.

In the chronic stage, ascaridosis in children is treated with decaris, medamine, and combantrin. Medamin, a derivative of carbamate-benzimidazole, is prescribed to sick children at a dose of 10 mg per 1 kg of the body, the dose is divided into 3 doses, the drug is taken after meals for 1 day. If there was a massive invasion, the course is 2-3 days.

Dekaris (levamisole) – an imidazole derivative – is prescribed to patients with a dose of 2.5 mg per 1 kg of the body per day, the dose is divided into 2-3 doses, the course is 1 day. Doctors may prescribe the treatment of ascariasis in children with combantrin (tablet form).

Treatment of ascariasis can be performed with Vermoxum (mebendazole). It should be borne in mind that the drug causes an increased locomotor activity of helminths, which can cause anti-peristalsis, vomiting and parasite penetration into the respiratory tract. Because vermox, especially with intensive invasion, children are not prescribed.

Together with the above named therapy, the child needs to prescribe multivitamins, enzyme preparations, in some cases – iron preparations. 3 weeks after treatment, control is carried out – three times examine the fecal mass of the child.

Forecast. The prognosis is favorable, subject to timely diagnosis and specific therapy. A serious prognosis for the acute stage of ascariasis in young children.

Fatal outcome is possible with ascariasis, complicated by the invagination of the parasite into the ducts of the digestive system, perforation of the intestine, with suffocation as a result of crawling worms into the upper respiratory tract. But it can be prevented by emergency surgery.

Prevention of Ascariasis in Children