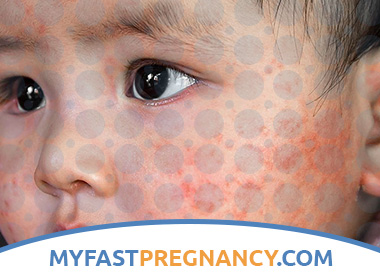 What is Atopic Dermatitis in Children?

Causes of Atopic Dermatitis in Children

60% of children with atopic dermatitis have one of the parents with the same disease.

Pathogenesis during Atopic Dermatitis in Children

Studying the disease, scientists have discovered a gene that causes dry, scaly skin and predisposes people to eczema. Defects in the filaggrin gene are associated with a significant increase in the risk of developing allergic diseases such as eczema, rhinitis, asthma, etc.

As a rule, the lipid (epidermal) skin barrier decreases in people with atopic dermatitis. Lipid barrier function – to prevent moisture loss. If the barrier decreases the skin loses fluid faster, and as a result it becomes dry.

Symptoms of Atopic Dermatitis in Children

Atopic dermatitis is a long-term, chronic condition. With an exacerbation of the disease, the symptoms worsen and the patient needs more intensive treatment.

Atopic dermatitis begins with unpleasant itching. The more the child scratches the skin, the more it itches, which can lead to bleeding. Let’s note the general symptoms of atopic dermatitis: redness, inflammation and dryness of the skin, itching (worse at night), cracks, moist discharge in the area of ​​scratches on the skin (scratches can lead to thickening of the skin), blisters, brownish-gray skin color, bumps

Some patients have eczema eruptions around the eyes, including on the eyelids. Scratching the eye area can eventually lead to noticeable loss of eyebrows and eyelashes. Babies usually have facial rashes.

With an exacerbation in patients, there is: increased itching (itching and scratching make the skin redder and more sensitive), there is a burning sensation in the affected areas, the skin becomes more scaly and dry, the bumps are more pronounced, the affected areas are susceptible to infection with bacteria. The aggravation lasts from a day or two to several weeks.

People with mild atopic dermatitis usually have small patches of dry skin that can sometimes itch. With severe symptoms, many itchy areas ooze. Children with atopic dermatitis have severe sleep disturbances that affect concentration at school during class.

Some factors can aggravate the symptoms of the disease, they include: prolonged hot showers or baths, mental stress, hormones, sweating, sudden changes in temperature, dry air, some types of clothing materials (wool), dust, sand, some household products. There are also environmental factors that affect the deterioration of clinical signs: allergens (pollen, dust mites, animal dander) – cause a disorder of the body’s immune system, an allergic reaction, hard water. These three allergens are also major contributors to asthma and hay fever.

Diagnosis of Atopic Dermatitis in Children

The diagnosis of the disease is made on the basis of symptoms and minor laboratory tests. During the examination, the patient and parents are asked typical questions about the presence of eczema among close relatives, about a tendency to allergic diseases (asthma, hay fever, etc.).

The doctor can assess the condition of the patient’s skin according to a number of diagnostic criteria in order to confirm the diagnosis of atopic dermatitis. Criteria may include:

As a rule, the above criteria are sufficient for a doctor to diagnose.

When diagnosing, it is important for a doctor to find out the factors that influenced the onset of the disease and the development of symptoms. The doctor will ask the patient or parents about the lifestyle, the foods they eat, and the home environment.

The doctor will definitely carry out differential diagnostics in order to exclude other skin diseases such as contact dermatitis, prickly heat, seborrheic dermatitis and psoriasis.

The patient will definitely be assigned allergy tests to establish a potential allergen.

Treatment of Atopic Dermatitis in Children

There is currently no cure that will get rid of the disease permanently. However, there are many treatments available that are aimed at relieving symptoms and improving quality of life. Treatment is:

Light therapy (phototherapy) involves the use of natural or artificial light. Patients should be exposed to natural sunlight frequently. Other forms of phototherapy include the use of artificial ultraviolet light. Light therapy is very effective. Exposure to sunlight has many beneficial effects, but there are risks nonetheless: premature skin aging and a high incidence of skin cancer.

Emollients: lotions and ointments – soften and smooth the skin, keep it firm and moist. Emollients are very important during the treatment of atopic dermatitis, which helps prevent cracking and irritation of the skin. Creams and lotions are usually used for reddened, inflamed areas, while ointments are used for dry areas that are not inflamed. These remedies are often used to prevent worsening of outbreaks. The use of funds on the affected areas significantly reduces the severity of the disease.

The use of special anti-allergenic agents (soap, shampoo, shower gel).

In severe cases of atopic dermatitis, patients may experience complications:

Prevention of Atopic Dermatitis in Children

The disease can be controlled by avoiding scratches and provoking factors, by diet, taking additional medications (corticosteroids, antihistamines, antibiotics (in case of infection), taking courses of light therapy.

About 10% of children with atopic dermatitis suffer from food allergens found in cow’s milk, eggs, nuts, soy, and wheat, so they should be eliminated from the diet. Therefore, it is important, together with a nutritionist, to develop an individual diet, excluding food allergens. The doctor selects an alternative substitute for them.

Scratching increases the risk of infection. Children find it difficult to resist scratching the affected areas. Children are often unable to control their desire. Therefore, it is important for parents to keep their nails short and clean. Scratches can be worn for babies.

For preventive purposes, it is necessary to avoid provoking factors that affect the exacerbation of the disease. Parents should constantly remind their children of allergens.

Clothes made of synthetic fibers are contraindicated for children with atopic dermatitis. Parents should choose natural materials such as cotton.

To avoid dry skin, it is shown to take a daily warm bath with mild special hypoallergenic agents that retain skin moisture.