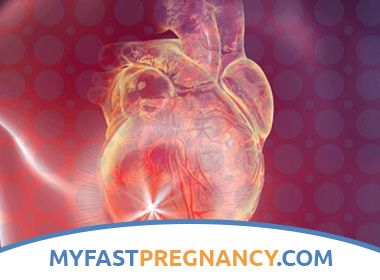 What is Heart Block in Children?

Heart block in children is a disorder that occurs when poor performance of conductor cells of the second and third types, which are responsible for the transmission of impulses throughout the conduction system and to the contractile myocardium.

Types of blockade for completeness:

When complete, a complete interruption of the passage of the excitation wave appears. And with incomplete impulses are conducted slowly, or some of the impulses may occasionally not pass through the lesion.

Blockade with respect to the bundle of Hisа:

Synotrial block – in which the impulse slows down or stops when conducting from the synotrial node to the atria. Types of synotrial blockade in children: permanent, transient.

Partial synotrial blockade is characterized by the fact that some of the impulses do not pass from the CA node to the atria, which is accompanied by periods of asystole. If several contractions of the ventricles happen one of the same, then the child may feel dizzy, fainting, and cardiac “fading” is possible. On auscultation, the doctor listens for a temporary absence of heart sounds. The ECG shows long diastolic pauses, after which slipping contractions or rhythms may appear.

Complete synotrial blockade is a condition when impulses do not reach the atria in any quantity at all.

Atrioventricular blocks – in which impulses are poorly conducted through the antrioventricular connection. Blockades are of the first, second and third degree.

Grade I can only be diagnosed with an ECG. Auscultatory methods are ineffective. Symptoms do not appear. The ECG shows the lengthening of the P-Q interval compared to the norm, adequate to the age of the child. Conducting impulses through the lesion site is slower than it should be.

Grade II atrioventricular block is divided into two types. Some of the impulses do not pass to the ventricles from the atria, therefore asystole may sometimes occur. With the help of auscultation, it is possible to determine the pauses in the rhythm of the heart, which occur periodically.

Grade III is known as complete transverse AV block. The impulses to the ventricles from the atria do not pass completely. Heterotopic rhythm is more rare than sinus one. Slow heart rate is auscultated. The heart rate is less than normal for children of this age.

Intraventricular block (bundle branch block)
There can be both isolated blockades, and combinations of several of them: left, right legs, anterior and posterior left branches. To diagnose this type of heart block in children is possible only with the help of the ECG method. In terms of severity, they are complete and incomplete.

Causes of Heart Block in Children

Synotrial blockade is often diagnosed in children from 7 years of age against the background of vegetative vascular dystonia with vagotonia. The atopine test in this case will show a positive result. This means that the blockade is removed by the introduction of atropine. CA-blockade is often caused by myocardial dystrophy or myocarditis in children. This block can develop in parallel with atrial fibrillation, extrasystole, AV block.

Sick sinus syndrome can have sinotrial block as one of the manifestations. Poisoning with certain drugs, for example, cordarone, quinidine, adrenergic blockers, is also among the causes of CA blockade in children.

Second-degree AV block in most cases occurs with serious lesions of the heart muscle. These are ICD, myocarditis, cardiosclerosis, cardiomyopathy. An incomplete blockade may become complete, and a complete block may become incomplete.

Acquired complete atrioventricular block often has a cause such as myocarditis. With the formation of sclerosis, it will be persistent, and with the current process, it will be transient. The cause of a complete transverse blockade can be toxic lesions of the AV node, which happens in case of drug poisoning. AV block in children can be triggered by cardiac tumors, atherosclerosis, or vasoconstriction that feed the atrioventricular junction.

Pathogenesis during Heart Block in Children

An incomplete synotrial block is very similar to a CA node failure. On the ECG in these two cases, a long pause is recorded. The sick sinus syndrome can manifest itself as a failure of the CA-node – it cannot generate impulses for some time, because the power supply is interrupted.

Type II blockade differs from the first in that there is no consecutive lengthening of the P-Q interval on the ECG. It is either within the normal range for the age of the child, or persistent elongation is observed. Ventricular complexes, as in type I blockade, periodically fall out.

Symptoms of Heart Block in Children

Complete transverse blockade can be either acquired or congenital. Congenital happens if the child has suffered late congenital carditis. In this case, it is a consequence of postmyocarditis sclerosis. Isolated complete congenital AV block becomes a consequence of the formation of conductive cells of the atrioventricular node. Symptoms may not appear in this case, except for a rare pulse. ECG helps diagnose the violation.

But then the blood flow inside the heart is disrupted, which leads to stretching of the chambers, slowing down the general blood circulation in the body, deteriorating nutrition of the myocardium and other organs. The result is a lag behind a child with such a diagnosis, not only physically, but also mentally. AV block can have complications such as heart failure.

Acquired transient AV block in children can be manifested by attacks of loss of consciousness, which pass with convulsions, lack of pulse, cyanosis. Such attacks are explained by temporary asystole at the time of switching the ventricles to a heterotopic rhythm. Asystolic pauses are life-threatening for the child. Short bouts of asystole can manifest itself with symptoms such as dizziness, short-term fainting, and weakness. Fainting can occur due to emotional stress or physical overload.

Diagnosis of Heart Block in Children

Reliable AV block in children is diagnosed only by ECG. Atrial P waves and ventricular QRST complexes on the ECG are recorded independently of each other. The P-P interval is more meek than If the heterotonic pacemaker is in the ventricles, the ventricular complex will be deformed.

Treatment for Heart Block in Children

For the treatment of synotrial blockade, it is imperative to cure the underlying disease. With frequent fainting, atropine-like drugs are used to reduce the degree of blockade. Bellatamial and amizil are effective. Severe cases are treated only in cardiac surgery departments for the treatment of cardiac arrhythmias, using electrocardiostimulation.

No special treatment is required for grade I AV block. The underlying disease is treated. Do not take drugs that slow down conduction, for example, cardiac glycosides and potassium.

Second-degree AV block in children is treated depending on the underlying disease of the child. If it is myocarditis, then glucocorticosteroids are attributed. If this is myocardial dystrophy, then cardiotropic drugs are needed.

In the congenital form of complete AV block, no medication is used, because they have no effect. Children should have a minimum of physical activity. With attacks of asystole and severe bradycardia, only an artificial pacemaker helps.

Morgagni-Adams-Stokes attack can be removed by closed heart massage. Adrenaline and atropine are injected subcutaneously. Temporary cardiac stimulation is used.

The acquired form of complete AV block against the background of myocarditis is treated with glucocorticosteroids and cardiotropic drugs. Do not take cardiac glycosides, potassium. If medications do not have the desired effect, frequent fainting occurs, there is severe bradycardia, then the doctor may prescribe an artificial pacemaker.

Intraventricular heart block in children is not treated. Treat the underlying disease. Myocarditis is treated with glucocorticosteroids, MKD is treated with cardiotropic drugs. With intraventricular blockages, it is necessary not to load the child physically, active games are contraindicated, it is impossible to enroll the child in a sports section and use it in agricultural work.

Prevention of Heart Block in Children